Moderate Flood Warnings For Dawson, Connors And Isaac Rivers - Moderate Flood Warning for the Connors and Isaac Rivers and a Minor Flood Warning for the Dawson River Issued at 11:09 AM EST on Friday 28 February ...
PM confident of low death toll from virus - Scott Morrison is confident Australia can get through a global coronavirus pandemic without a high death toll as his government prepares to ramp up th ...
Tamil Family Waiting Anxiously For Judge's Decision - The Tamil family facing deportation back to Sri Lanka are awaiting a decision after a two day Federal court case. The judge overseeing the case ha ...
Woman charged for cocaine hidden in bra - A woman has allegedly been caught with 40 bags of cocaine hidden inside her bra while in a car in Sydney's inner Kings Cross district.
Qld boy on attempted murder charges - A 14-year-old boy is facing attempted murder charges over a knife attack on two younger pupils at a Queensland school.
Man charged after 'biting off ear' in NSW - A man has lost part of his ear after it was bitten off during a fist fight in Sydney's inner west.
Fake 'prince' deported after jail release - Fake Tahitian prince Joel Morehu-Barlow, who was imprisoned over the theft of $16 million from Queensland Health, has been released from jail and depo ...
Canada to scrap security for Harry, Meghan - Canada will no longer provide security for Prince Harry and Meghan Markle once the couple are no longer working members of the British royal family in ...
Virus means 1.8m fewer tourists: industry - The coronavirus outbreak means Australia will have 1.8 million fewer international visitors in the first six months of this year compared to last year ...
Riewoldt backs AFL on concussion policy - The sight of Jack Riewoldt, on all fours, peering out from the stairs behind the MCG bench was the source of some mirth a decade ago but a lot has cha ... 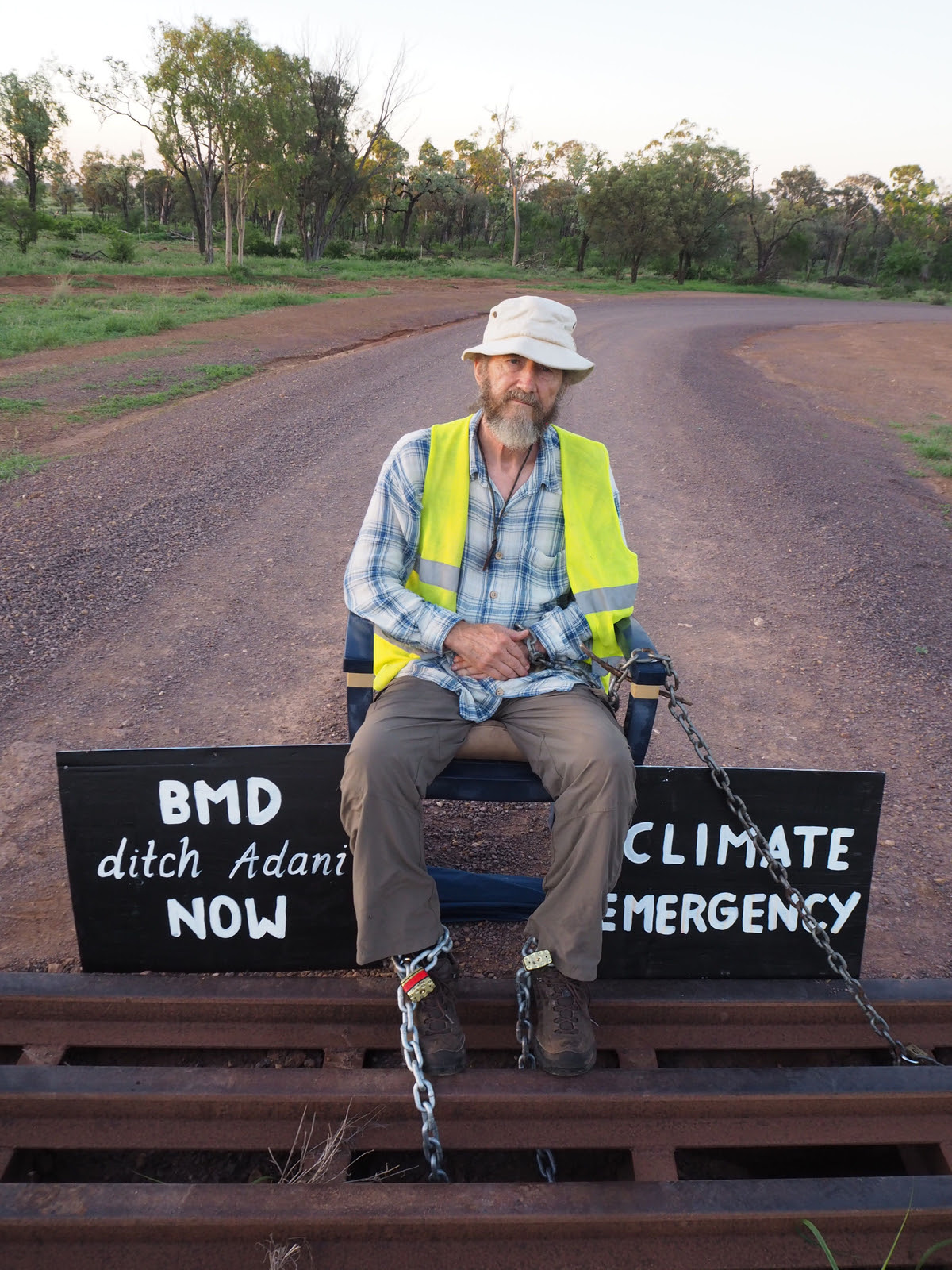 It wasn’t exactly a bunch of red roses that awaited Adani contractor BMD as they went to work on Adani’s mine project on Valentine’s Day.

Instead, it was 65-year old Craig from the burnt-out Blue Mountains that welcomed them. Craig was locked on to a cattle grid, preventing workers reaching the BMD work camp and continuing work on the railway corridor that is critical to Adani’s Carmichael mine.

Craig’s action was driven by his concern about fossil-fuel driven climate change.

“In the 1980s I worked as a scientist at the Pollution Control Commission. Even then, we knew that coal-fired power stations were a menace. For the last three decades I’ve campaigned ‘within the system’ for real action on climate change. I’ve written letters, signed petitions and met with politicians. But still our reefs are dying and our forests burning”, Craig said.

“It’s time for everyday Australians, and that’s all I am, to step up and take peaceful direct action to shut down the mining and burning of thermal coal. Climate change isn’t something coming, it’s here now, so act!”

A spokesperson for Frontline Action on Coal (FLAC) stated, “The Australian government continues to claim that concerns about climate change and Australia’s dangerous coal industry, are coming only from the ‘outliers’ of our population. Craig’s action shows that, more and more everyday Australians are turning up on the frontline, refusing to be quiet and demanding their government listen to the demands of the nation and the world. Companies that decide to collaborate with Adani’s climate-destroying mine will continue to be a focus for nonviolent direct action. Come join us on the frontline and, in the meantime, Happy Valentine’s BMD!”

An Adani Mining spokesperson said, “After being caught out deliberately lying about Adani’s truck operations, anti-coal activist group FLAC (Frontline Action on Coal) has only a small group of full-time protesters still active in its protest campaign against Adani".

“Today’s protest activity in Central Queensland has had no impact on our operations. Just one activist chained himself to a cattle grid on an access road to the project construction site. Police were immediately notified and travelled to the site to remove him. A colossal waste of time and resources.

“Everyone is entitled to voice their opinion, but we encourage people to do so safely, legally and without putting people in harm’s way.

“FLAC was recently forced to defend itself when it was exposed for purposefully misleading the public and media by incorrectly saying Adani’s trucks would be driverless" the statement concluded.