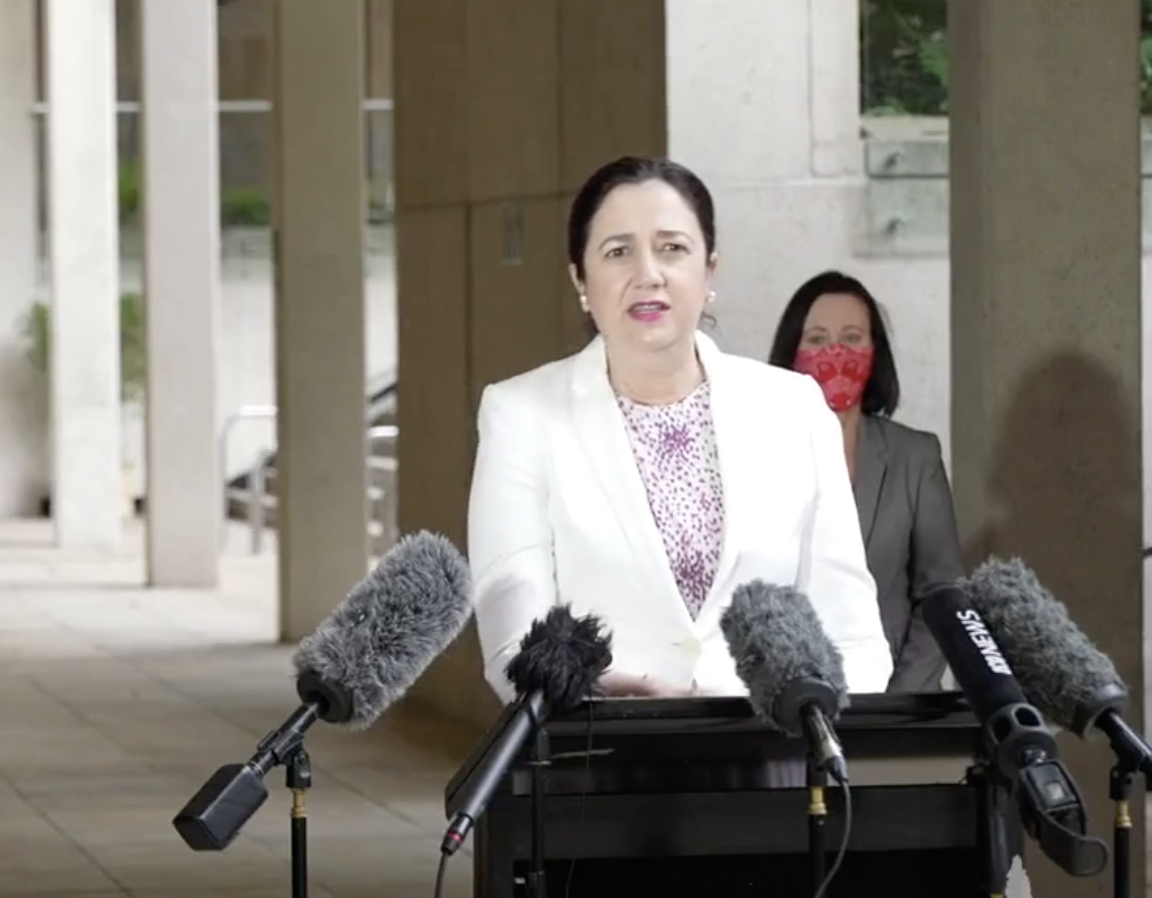 Queenslanders across the entire state are being implored to be on alert for COVID-19 symptoms with 10 new cases recorded overnight.

Six involve community transmission and are linked to two separate clusters involving a doctor and nurse working with infected overseas travellers being treated the PA Hospital, in Brisbane.

Two other cases are under investigation. The other two people acquired the virus overseas.

Will lockdown be extended to regional areas?

Premier Annastacia Palaszczuk says the fact contact tracers have connected each case of community transmission to the source is “good news”, but she says there will “probably” be more cases.

When asked if the Greater Brisbane lockdown would extend beyond Thursday and over the Easter weekend, Ms Palaszczuk says it is too early to say and such decisions are decided “day by day”.

"Everyone is worried, but the fact we have these cases linked is good news.”

“The next two days are critical.”

Chief Health Officer Jeannette Young would not rule out extending the lockdown to regional areas, if there are links to the latest outbreak.

However, Dr Young says it depends on where at-risk venues are and whether there are any positive coronavirus cases.

She is currently keeping an eye on Gladstone, Hervey Bay, Toowoomba, Gold Coast and Brisbane areas due to connections to covid-19 patients.

“The message here is people should be on alert no matter where they are in Queensland.

“Because people have been very mobile since 20 March, out and about throughout the state.”

Some of the infected cases have left the Brisbane area, Dr Young says, so it is critical anyone, anywhere in Queensland with symptoms gets tested.

While it is unclear whether people in Great Brisbane will be able to leave for the Easter long weekend, Deputy Commissioner Steve Gollschewski says what is known is they can’t leave before 5pm on Thursday.

From tomorrow, a new mandate comes into effect, stipulating frontline health workers who haven’t had their vaccine can no longer work with COVID-19 patients.

“41,000 of our frontline health workers and people looking after hotel quarantine have been vaccinated, which is around 89 per cent,” Ms Palaszczuk says.

“And we expect that to completed over the next 48 hours.”

When asked why that mandated hasn’t already been in place, Dr Young says because “we didn’t have enough even “vaccine” and staff were needed to look after the rising number of overseas travellers being treated in hospital for the virus.

Queensland is currently dealing with two separate clusters of coronavirus, both of which are the UK strain of the virus, which is considered more dangerous and contagious.

The first cluster involves an unvaccinated doctor at Brisbane’s Princess Alexandra Hospital and two others who tested positive in early March.

The 26-year-old Stafford man and a close contact of his – a Strathpine man – subsequently tested positive along with several others and genomic sequencing has linked them to the doctor. This cluster is now at eight with two more cases under investigation.

The second cluster involves an unvaccinated nurse at the same hospital who became infected while working a shift on March 23.

She caught the virus off a man who was being treated in the hospital after returning from India.

Her sister caught the virus along with several others after going on a trip to Byron Bay.

This cluster stands at seven with an additional case under investigation.

Five of today’s new cases are linked to the nurse or her sister.