Frydenberg promises big aged care package - Treasurer Josh Frydenberg says his third budget on Tuesday will include a package for aged care, which will be bigger than the $10 billion a year than ...
Federal Budget 2021 - what is known so far - FEDERAL BUDGET - WHAT'S KNOWN SO FAR:THE BIG PICTURE* Scott Morrison and Josh Frydenberg say it will be a "jobs budget" with the aim of boos ...
Car bomb at Afghan school kills kids - Explosions caused by a car bomb and mortars outside a school in the Afghan capital Kabul have killed dozens of students and injured many more.
Reds after-siren try seals Super AU title - James O'Connor's rugby resurgence has flourished again, the Queensland Reds playmaker scoring five minutes into injury-time against a 13-man Brumbies ...
Boost for single parents buying first home - Single parents buying their first home may soon be able to with a deposit of only two per cent under a new federal scheme.
'Abandoned' Aussie dies of virus in India - The Australian government "abandoned" a resident to die of coronavirus in India, his daughter says, accusing it of ignoring her pleas to bri ...
Masked Mother's Day weekend in NSW - Sydneysiders are being urged to wear masks and adhere to other restrictions without cancelling their Mother's Day plans.
Amazon destruction speeds up for 2nd month - Deforestation in Brazil's Amazon rainforest rose 43 per cent in April from the same month a year ago, preliminary government data shows, the second co ...
De Belin jury to continue for second week - A jury deliberating on rape charges against NRL footballer Jack de Belin will return for a sixth day of discussion, after failing to reach a verdict o ...
Bowen is a step closer to getting a CT scanner as hospital upgrades begin - Health services in Collinsville and Bowen are set to be improved thanks to the Federal Government. The Commonwealth is spending $7 million to build ... 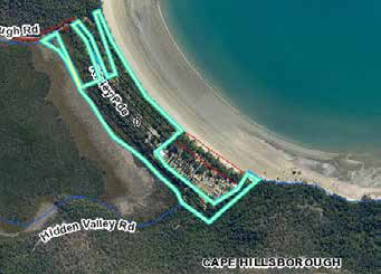 Dogs will no longer be allowed at Cape Hillsborough after the Mackay Regional Council made changes to local laws.

The changes which were passed at a Council meeting on Wednesday complement State Government laws, which prohibit dogs in national parks.

Mackay Mayor Greg Williamson says the changes were necessary to protect the native wildlife after reports that wallabies have been attacked.

"There have been some very, very vicious attacks by dogs and the wallabies, and of course the wallabies are a huge tourist attraction," Mr Williamson says.

Fines already apply for anyone who is caught with a pet in Cape Hillsborough National Park, but that has now been extended to include the beach front and Risley Parade.

Mr Williamson says park rangers will monitor the area and enforce the new laws over the next few months.

"We're out to make sure that people do not do it and in the adoption of this local law, there will be consequences for people who do not do the right thing," he says.

The Council also adopted other changes to local laws this week, which include allowing dogs to be off their leads at Apex and Queens Park.

The penalties for illegally parking in a disabled spot were increased to $533 and residents with blocks between 700m² and 4000m² are allowed to have up to 10 birds on their property, including ducks and geese.