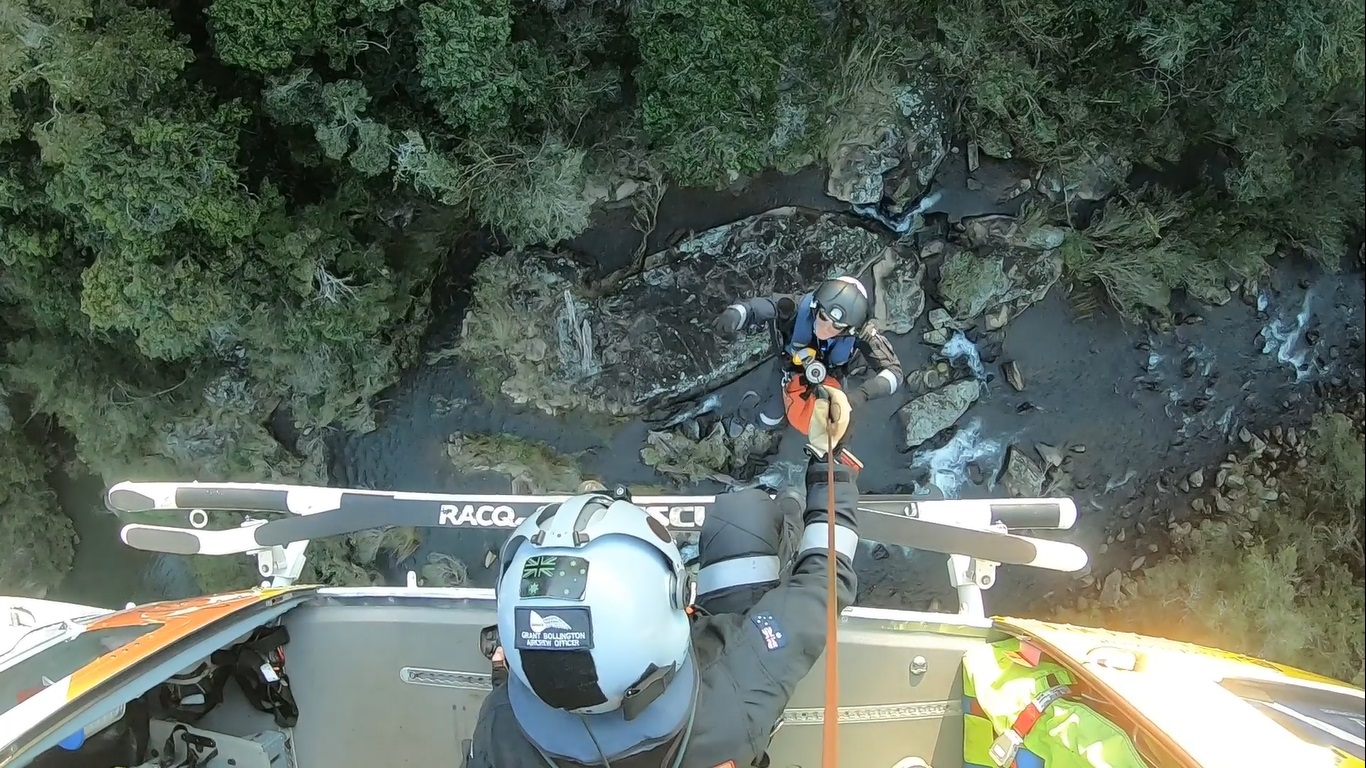 A well-prepared hiker has saved himself from spending the night, cold, injured and alone, on a deserted walking track at Eungella, west of Mackay.

The 65-year-old tourist had set out from his campsiteon the Broken River Trail about 2pm on Monday, telling his wife, who had no mobile phone reception, he would return by 4pm.

About an hour into the walk, the man slipped and broke his ankle.

Thankfully, he had warm clothes and emergency equipment on hand.

The hiker activated a Personal Locator Beacon, alerting authorities that he was in distress and providing them with his co-ordinates.

The RACQ CQ Rescue helicopter was tasked, tracking the injured hiker to within 120 metres of his exact location.

Unfortunately, the rocky, bush terrain and thick, tree canopy made it impossible for the crew to spot the bushwalker, so after an hour of aerial searching, they were forced to winch people down to search on foot.

Crew member Keeley Wakefield waded through a river on mossy rocks and navigated thick bush, vines and broken branches for more than 30 minutes, following the sounds of the injured man blowing a rescue whistle.

“I could hear the whistle and sometimes hear him shouting out, but it was very rough going – there was no track and the difficult terrain made it very slow going. Plus, it was right on last light,” Mr Wakefield says.

“After searching for a while, I realised he was actually on the other side of the river and that the best chance of me getting to him was to be winched back out and dropped closer to his exact location which was about 100 metres away.”

As Mr Wakefield was being winched down again from the chopper, he saw the flash from the injured walker’s camera, so he could pinpoint his exact location.

“When I finally found him he was taking my photo and saying ‘My rescuer is here!’.

"He was pretty happy to see me and doing really well all things considered.”

The pair were forced to wait nearly two hours in the freezing, dark conditions as the helicopter returned to base to refuel.

“In that time I was getting him ready for the winch. We had to move about 50 metres to a suitable winch location where there was a hole in the canopy and that took us about 20 minutes due to his injury,” he says.

The Critical Care Paramedic was then winched down to assist Mr Wakefield secure the patient in the Air Rescue Vest and winch him up into the helicopter.

After a gruelling six hour mission, the helicopter was finally able to fly the very grateful walker, believed to have suffered a broken ankle and injured arm, back to base at Mackay Airport where he was then transported by ambulance to Mackay Base Hospital.

The walker’s emergency contact registered to the PLB was his wife, who unfortunately had no mobile reception back at the Broken River campsite.

“Luckily, he was incredibly well prepared and set off the PLB as soon as he ran into trouble on the track.

"Without the rescue helicopter and without that PLB, he would have likely spent the night out there in the freezing cold, just waiting for someone to eventually find him,” Mr Wakefield says.